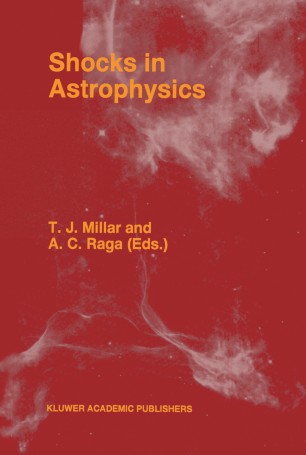 Proceedings of an International Conference held at UMIST, Manchester, England from January 9–12, 1995

This volume contains the proceedings of an international conference on Shocks in Astrophysics held at UMIST, Manchester, England from January 9-12, 1995. The study of interstellar and circumstellar gas dynamics has a long and distinguished history in Manchester and has been almost entirely concentrated in the school founded by Franz Kahn in the Astronomy Department, University of Manchester. In January 1993, one of us (AR) was appointed to the faculty of the Astrophysics Group in the Department of Mathematics at UMIST and astrophysical gas dynam­ ics became a major interest of the Group. The subject of this conference was chosen partly for the topicality of the subject matter and partly to help synthesise this expertise with the expertise in interstellar chemistry already present in the Group. The first fruits of this synthesis are contained in this volume. As it happened, this conference celebrated, not so much the beginnings of a long and fruitful collabo­ ration, but rather gave many of Alex's friends the chance to say a fond farewell as he departed UMIST at the end of January 1995 to take up a chair at UNAM, Mexico City. The core of this volume consists of twelve review articles, marked (R) in the list of contents, incorporating observational and theoretical studies of shock waves in a variety of situations from Herbig-Haro objects to Supernova Remnants to Active Galactic Nuclei. We have also included the contributed (C) and poster (P) papers.