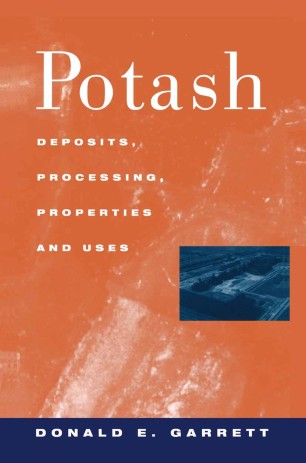 Potash is the term generally given to potassium chloride, but it is also loosely applied to the various potassium compounds used in agriculture: po­ tassium sulfate, potassium nitrate or double salts of potassium and magne­ sium sulfate (generally langbeinite, K S0 • 2MgS0 ). Sometimes the var­ 2 4 4 ious compounds are differentiated by the terms muriate of potash, sulfate of potash, etc. When referring to ores, or in geology, all of the naturally­ found potassium salts are called "potash ores". However, originally potash referred only to crude potassium carbonate, since its sole source was the leaching of wood ashes in large pots. This "pot ash" product was generally recovered from near-seacoast plants, such as the saltwort bush, whose ashes were richer in potassium than sodium carbonate. Inland plant's ashes were generally higher in sodium carbonate, giving rise to the word alkali from the Arabic word for soda ash, al kali. The term was then carried over after potassium was discovered to form the latin word for it, kalium. The recovery of potash from ashes became a thriving small cottage industry throughout the world's coastal areas, and developing economies, such as the early set­ tlers in the United States were able to generate some much-needed income from its recovery and sale. This industry rapidly phased out with the advent of the LeBanc process for producing soda ash in 1792, and the discovery about the same time of the massive sodium-potassium nitrate deposits in the Atacama Desert of Chile.