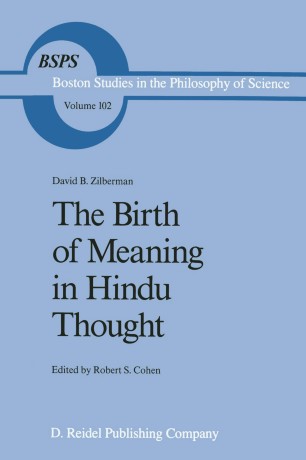 The Birth of Meaning in Hindu Thought

Part of the Boston Studies in the Philosophy of Science book series (BSPS, volume 102)

In his letter to B. K. Matilal, dated February 20, 1977, the author of this book wrote about his work on Advaita-Vedanta: " ... It was not to present Advaita in the light of current problems of the logic of scientific discovery and modern philosophy of language ... but just the contrary. I do not believe that any 'logic without metaphysics' or 'philosophy of language without thinking' is possible." This passage alone may serve as the clue to Zilberman's understanding and mode of explaining that specific and highly original approach to (not 'of'!) philosophy that he himself nicknamed modal. Four points would seem to me to be most essential here. First, a philosophy cannot have 'anything un-thinking' as its object of investigation. Language, to Zilberman, is not a phenomenon of con­ sciousness but a spontaneously working natural mechanism (like, for instance, 'mind' to some Buddhist philosophers). It may, of course, be­ come used for and by consciousness; consciousness may see itself, so to speak, in language, but only secondarily, only as in one of its modifica­ tions, derivations or modalities. That is why to Zilberman linguistic- as to Kant psychology - cannot and must not figure as the primary ground for any philosophical investigation.