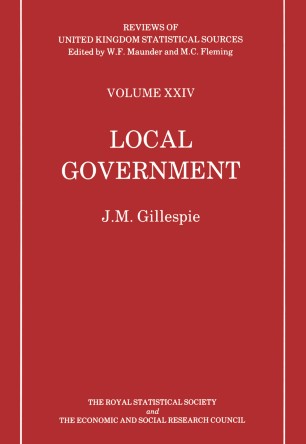 The Sources and Nature of the Statistics of the United Kingdom, produced under the auspices of the Royal S~atistical Society and edited by Maurice Kendall, filled a notable gap on the library shelves when it made its appearance in the early post-war years. Through a series of critical reviews by many of the foremost national experts, it constituted a valuable contemporary guide to statisticians working in many fields as well as a bench-mark to which historians of the development of Statistics in this country are likely to return again and again. The Social Science Research Council* and the Society were both delighted when Professor Maunder came forward with the proposal that a revised version should be produced, indicating as well his willingness to take on the onerous task of editor. The two bodies were more than happy to act as co-sponsors of the project and to help in its planning through a joint steering committee. The result, we are confident, will be judged a worthy successor to the previous volumes by the very much larger 'statistics public' that has come into being in the intervening years. Mrs SUZANNE REEVE Mrs EJ. SNELL Secretary Honorary Secretary Economic and Social Research Council Royal Statistical Society *SSRC is now the Economic and Social Research Council (ESRC). vii MEMBERSHIP OF JOINT STEERING COMMITTEE (November 1986) Chairman: Miss S. V. Cunliffe Representing the Royal Statistical Society: Mr M. C. Fessey Dr S. Rosenbaum Mrs E. J.