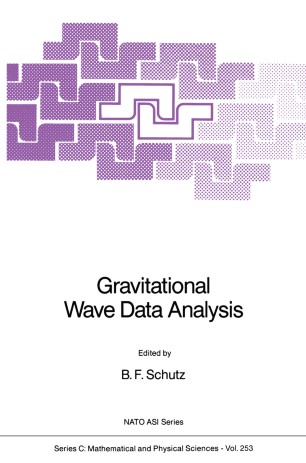 The articles in this book represent the major contributions at the NATO Advanced Research Workshop that was held from 6 to 9 July 1987 in the magnificent setting of Dyffryn House and Gardens, in St. Nicholas, just outside Cardiff, Wales. The idea for such a meeting arose in discussions that I had in 1985 and 1986 with many of the principal members of the various groups building prototype laser-interferometric gravitational wave detectors. It became clear that the proposals that these groups were planning to submit for large-scale detectors would have to address questions like the following: • What computing hardware might be required to sift through data corning in at rates of several gigabytes per day for gravitational wave events that might last only a second or less and occur as rarely as once a month? • What software would be required for this task, and how much effort would be required to write it? • Given that every group accepted that a worldwide network of detectors operating in co­ incidence with one another was required in order to provide both convincing evidence of detections of gravitational waves and sufficient information to determine the amplitude and direction of the waves that had been detected, what sort of problems would the necessary data exchanges raise? Yet most of the effort in these groups had, quite naturally, been concentrated on the detector systems.