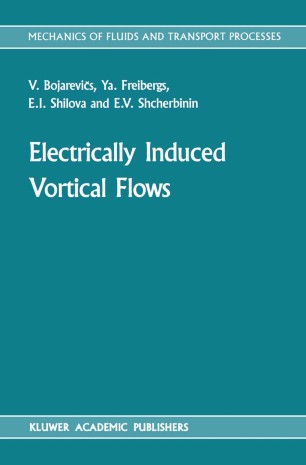 Part of the Mechanics of Fluids and Transport Processes book series (MFTP, volume 9)

Every scientific subject probably conceals unexplored or little investigated strata, which may show up at the proper time when favourable conditions coincide (practical demands, a circle of scientists prepared to recognize the novelty and capable of giving impetus to the development of a new theory, etc.). Something like this occurred in early seventies for magnetohydrodynamics, which at the time was considered to be a relatively complete branch of hydro­ dynamics with no apparent broad, unexplored areas. It was unexpectedly realized that, in addition to the traditional methods of affecting an electrically conducting medium, there is yet another way, one which subsequently lead to a new direction in magnetohydrodynamics. In the Soviet scientific literature this direction has been termed 'electrically induced vortex flows', the essence of which are hydrodynamic effects due to the interaction of an electric current passing through the fluid with its own magnetic field. It cannot be said that this direction was created ex nihilo: individual studies related to the flows driven in a current-carrying medium in the absence of external magnetic fields appeared in the sixties; in the thirties the flows them­ selves were known to take place within electrical arcs; and yet the first observa­ tions on the behaviour of liquid current-carrying conductors were made at the beginning of this century.