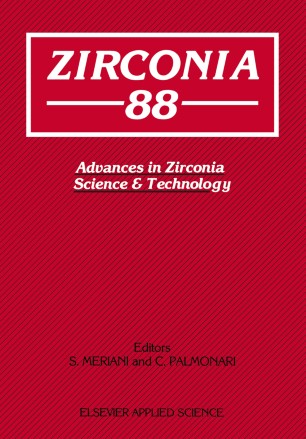 Advances in Zirconia Science and Technology

This meeting, ZIRCONIA 'SS - Advances in Zirconia Science and Technology, was held within the framework of the 7tb SIMCER - International Symposium on Ceramics (Bologna, December 14-17, 1988) organized by the Italian Ceramic Center of Bologna, with the sponsorship of ENEA and Agip and the endorsement of the American Ceramic Society, and under the auspices of the European Ceramic Society. In the year 1988, the University of Bologna celebrated its 900th Anniversary. ZIRCONIA '88 was one of the celebration events which brought together academics and researchers from allover the world. Under the chairmanship of Prof. C. Palmonari, Director of the Italian Ceramic Center of the University of Bologna, the Organizing Committee consisting of J. Castaing (C.N.R.S. Meudon, France), S. Meriani (University of Trieste, Italy), V. Prodi (Un-iversity of Bologna, Italy) and J. Routbort (U.S. Dept. of Energy, Washington, USA) conducted a conference program of 47 contributions presented to the 220 enrolled Zirconia participants, out of the 775 enlisted within the main SIMCER framework. The aim of ZIRCONIA '88 was to follow the stream of the well known International Conferences on the Science and Technology of zj rconia held in Cleveland, Ohio (1980), Stuttgart, Federal Republic of Germany (1983) and Tokyo, Japan (1986). SIMCER's goal was to bring together not only scientists and engineers directly involved with "advanced" ceramics but also a larger audience connected to the nearby Italian Ceramic District of Sassuolo.