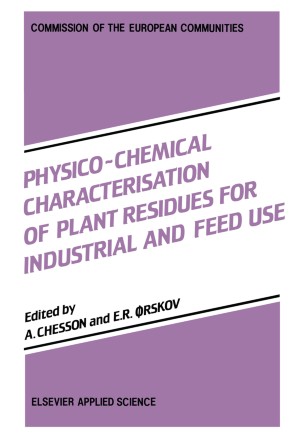 Physico-Chemical Characterisation of Plant Residues for Industrial and Feed Use

The workshop reported in this volume is one of a series sponsored by the Commission of the European Communities, Directorate-General for Science, Research and Development (DG XII), under the Concerted Action Programme COST 84-bis, entitled "Use of lignocellulose containing by-products and other plant residues for animal feeding". Since COST 84-bis was established there has been a major shift of emphasis in agricultural research in Europe, with the development of alternative uses for crops and their by-products becoming a priority issue. In recognition of this recent workshops he,ld under the aegis of COST 84-bis have been equally concerned with the potential of lignocellulosic residues to form the feedstock for a variety of new and established industrial uses in addition to their established use as animal feed. Development of strategies for the use of plants or plant residues with a high cell wall content is dependant on knowledge of cell wall structure and organisation and how structure relates to the behaviour of the wall during mechanical, chemical or biological processing. Progress in cell wall research has been greatly facilitated by the substantial developments in methods of instrumental analysis that have occurred during the last decade. Plant tissues now can be examined in far greater detail and far more rapidly than was hitherto possible, often without the need for extraction or modification of the cell wall or its component polymers.