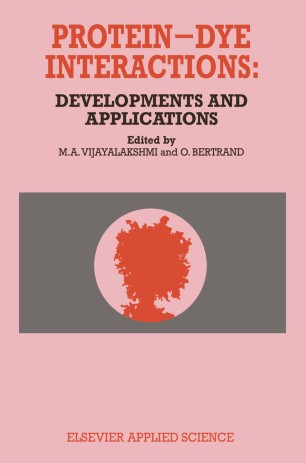 This volume contains the papers and reports presented at the First International Conference on Dye-Protein Interaction, held 24-28 July 1988 at the University of Compiegne, France. This was the first international meeting dealing entirely with dye-protein interaction. The major focus of the conference was on the better understanding of the mechanism of interaction of proteins with different triazine dyes and the synthesis of novel structural dyes having good biomimetic activities. The potentials and limits of their use in biotechnology, mainly for purification, were stressed. Current contributions in developing dye-based affinity methods were highlighted in such areas as affinity partition, affinity precipitation and new support matrices for efficient affinity chromatography, etc. The interrelation between metal chelates and dyes in terms of their interactions with proteins was underlined. It is our belief that this proceedings volume will be a stimulus for broad and creative applications of dye affinity concepts in many fields of biomedical research and biotechnology. for understanding the In addition, a discussion session emphasised the necessity toxicological aspects of these dyes, their fragments and their metabolites. This helped to trigger plans for future work, and this topic will be one of the priorities in a future meeting on dye-protein interactions. C. R. The help of the International Scientific Committee, which included Drs Lowe (UK), G. KopperschHiger (GDR) , E. Stellwagen (USA), D. Thomas (France), G. Birkenmeier (GDR), S. Rajgopal-Narayan (USA), J. P. Dandeu (France), D. Muller (France) and E. Dellacherie (France), in organising this meeting is gratefully acknowledged.