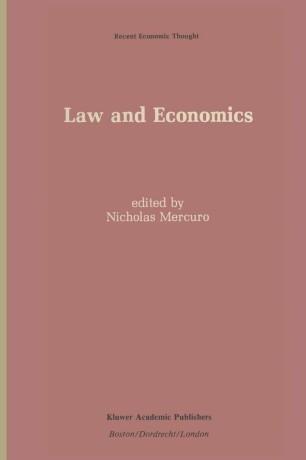 The character of economic life] in a society is dependent upon, among 2 other things, its political-legal-economic institutional setting. Within that institutional structure, the individuals who comprise that society attempt to cooperate with one another to their mutual advantage so as to accommodate their joint utility-maximizing endeavors. In addition, these same individuals call upon certain societal institutions to adjust the con­ flicting claims of different individuals and groups. In this regard, a society is perceived as both a cooperative venture for mutual advantage where there are an identity of interests and, as well, an arena of conflict where there exists a mutual interdependence of conflicting claims or interests. The manner in which a society structures its political-legal-economic institutions 1) to enhance the scope of its cooperative endeavors and 2) to channel internal political-legal-economic conflicts toward resolution, shapes the character of economic life in that society. In contemplating the structure of its institutions intended to promote cooperation and channel conflict, a society confronts several issues. At the most general level an enduring issue is how a society both perceives and then ideologically transmits (perhaps teaches or rationalizes), inter­ nally and/or externally, its perceptions of so-called "cooperative en­ deavors" and "arenas of conflict." There can be no doubt that the resultant structure of a society's institutions will reflect that society's perception as to what cooperation entails and what conflict constitutes.