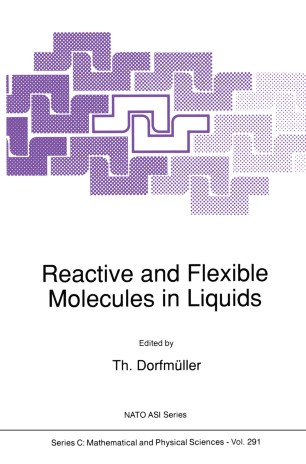 Reactive and Flexible Molecules in Liquids

The observable phenomena in liquids ",hich distinguishes this state of matter from other types of condensed matter can be mainly assigned to a) the configurational disorder and b) the random motion of molecules. Both, the static and the dynamic aspect of randomness are typical for the liquid state and serve as a useful guideline in the attempts to theoretically understand this state. These two basic features, however, introduce in liquid state theory a number of apparently unsurmountable technical and conceptual problems so that progress in the last decades has only been made by small steps. In order not to complicate the situation even more, the tacit assumption was made that we could neglect internal motions of the molecules and that the molecular interactions which had to be taken into account are as simple as possible. We thus became accustomed to visualize molecules in the liquid as a dense assembly of classical rigid particles interacting with a potential which basically is represented by a Lennard-Jones type relation. In the last decade, it has become obvious that with these restrictions we dis­ regard many interesting effects in those liquids which are the most important ones. We thus see a serious gap developing between the refinements of liquid state theory and the exciting experiments being carried out in many laboratories.