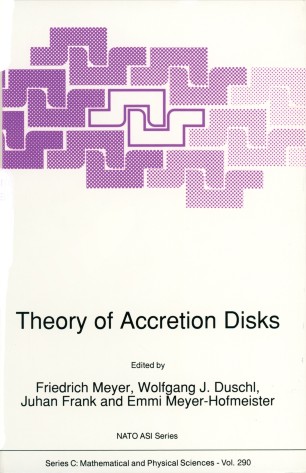 With the advent of space observatories and modern developments in ground­ based astronomy and concurrent progress in the theoretical understanding of these observations it has become clear that accretion of material on to compact objects is an ubiquitous mechanism powering very diverse astrophysical sources ranging in size and luminosity by many orders of magnitude. A problem common to these systems is that the material accreted must in general get rid of its angular momentum and this leads to the formation of an Accretion Disk which allows angular momentum re-distribution and converts potential energy into radiation with an efficiency which can be higher than the nuclear burning yield. These systems range in size from quasars and active galactic nuclei to accretion disks around forming stars and the early solar system and to compact binaries such as cataclysmic variables and low-mass X-ray binaries. Other objects that should be mentioned in this context are 88433, the black hole binary candidates, and possibly gamma-ray burst sources. Observations of these systems have provided important constraints for theoretical accretion disk models on widely differing scales, lumi­ nosities, mass-transfer rates and physical environments.