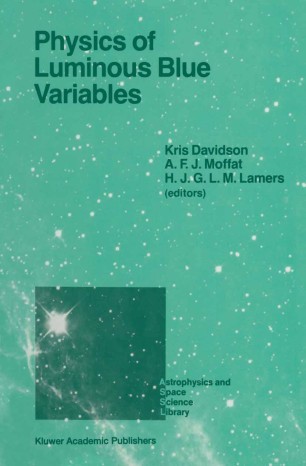 A strange field of speculation is opened by this phenomenon ... here we have a star fitfully variable to an astonishing extent. and whose fluctuations are spread over centuries. apparently in no settled period. and with no regularity of progression. What origin can we ascribe to these sudden flashes and relapses? What conclusions are we to draw as to the comfort or habitability of a system depending for its supply of light and heat on so uncertain a source? -- J. F. W. Herschel! We can imagine, at least, that the study of Luminous Blue Variable stars began as the official court astrophysicists of Eridu speculated about a new 5000 years ago first-magnitude star which persisted in their southern sky for several years.2 After that the topic languished for a while, but now it has been renewed following recent observations by Blaeu (P Cygni, c.1600) and Herschel (1] Argus, c.1840) ... -- More soberly, it is only within the past few years that we have begun to understand LBV's and to recognize their coherence as a class. Thus only a minority of astronomers are familiar yet with this relatively new topic, whose potential impli­ cations are of great interest (see below). One purpose of this book, we hope, will be to provide an accessible overview of the subject for interested astronomers and astrophysicists in general.