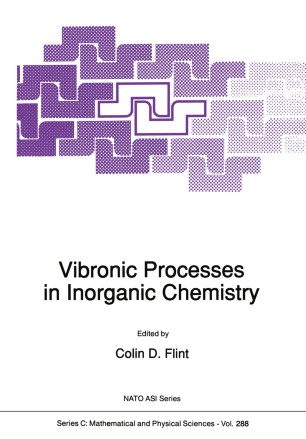 This volume reports the main lectures and seminars given at the NATO Advanced Study Institute on Vibronic Processes in Inorganic Chemistry held at Riva del Sole, Tuscany, Italy between 7th and 18th September 1988. In addition to the about 40 hours of lectures repres­ ented by this volume, a further fifteen lectures on current research topics were given by the other participants. Many factors contributed to the decision to hold this ASI but the final trigger was given at a meeeting in Padova when Marco Bettinelli, Lorenzo Disipio and Gianluigi Ingletto asked me to recommend a text where the diverse conceptual, spectroscopic and structural consequences of the impossibility of treating the motions of the electrons and nuclei independantly in inorganic compounds were presented. There seemed to be no suitable comprehensive text where the relationship between the relatively simple theoretical ideas and the huge range of their application in inorganic chemistry and physics was developed. The Institute and this text are a contribution to filling this gap. Seventy-nine participants from fifteen countries attended the Institute. Topics raised in the lectures and from the participants own research frequently led to discussions which went on long into the night.