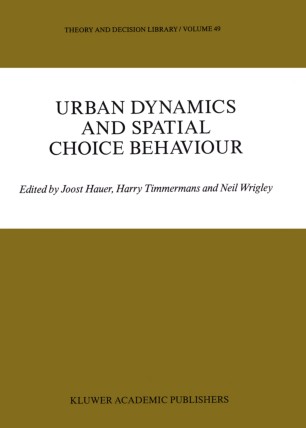 Thi s book ari ses from The Fourth European Coll oqui urn on Theoret i ca 1 and Quant itat i ve Geography wh i ch was he 1 din Ve 1 dhoven, The Netherlands in September 1985. It contains a series of papers on spatial choice dynamics and dynamical spatial systems which were presented at the colloquium, together with a few other soll icited ones. The book is intended primarily as a state-of-the art review of mainly European research on these two fastly growing problem areas. As a consequence of this decision, the book contains a selection of papers that differs in terms of focus, level of sophistication and conceptual background. Evidently, the dissimination of ideas and computer software is a time-related phenomenon, which in the European context is amplified by differences in language, the profile of geography and the formal training of geographers. The book reflects such differences. It would have been impossible to produce this book without the support of the various European study groups on theoretical and quantitative geography. Without their help the meetings from which this volumes originates would not have been held in the first place. We are also indebted to the Royal Dutch Academy of Science for partly funding the colloquium, and to SISWO and TNOjPSC for providing general support in the organisation of the conference.