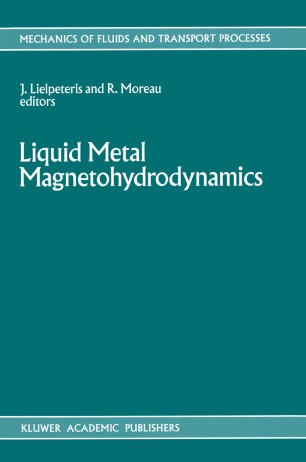 Part of the Mechanics of Fluids and Transport Processes book series (MFTP, volume 10)

Liquid metal MHO is within the scope of two series of international conferences. One is the International Congress on "MHD Power Generation", held every four years, which includes technical and economical aspects as well as scientific questions. The other if the Beer-Sheva Seminar on "MHO Flows and Turbulence", held every three years in Israel. In addition to these well established meetings, an IUTAM Symposium was previously organized in Cambridge (UK) in 1982 on "Metallurgical Applications of MHD" by the late Arthur Shercliff. It was focussed on a very specific subject developing radiply from the middle of the 1970's. The magnetic field was generally AC, including frequencies high enough for the skin-depth to be much smaller than the typical length scale of the liquide pool. And the development of new technologies, or the improvement of existing ones, was the main justification of most of the researches presented and discussed. Only two participants from Eastern countries attended this Symposium. By the middle of the 1980's we felt that on this very same topic ideas had reached much more maturity than in 1982. We also realized that a line of research on MHD flows related to fusion reactors (tokamaks) was developing significantly, with particular emphasis on flows at large interaction parameter.