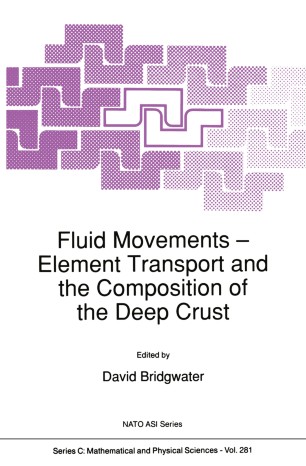 Fluid Movements — Element Transport and the Composition of the Deep Crust

Many geologists have an equivocal attitude to fluid movements within the crust and the associated changes in the chemical and physical properties of crustal rocks. The controversies earlier this centuary between the "soaks" and the "pontiffs" memorably summarised by H. H. Read (1957) in The Granite Controversy have largely been resolved. Few would now advocate the formation of large granitic bodies by in situ transformation of pre-existing crust as the result of the passage of ichors without the formation of a granitic melt. To many geochemists fluid transport and metasomatism have become slightly suspect processes which at the most locally disturb the primary geochemical and isotopic signatures. While there is common agreement that there are marked differences in the composition of the lower and upper crust, the role of fluid movement as one of the controls of this differentiation is often neglected in favour of suggested primary differences in the composition of igneous rocks emplaced at different depths. Selective fluid transport however provides many geologists with their livelyhood. Without the secondary concentration of commercially important elements by fluids within the crust the mining industry, geological science and human activities based on their products would be very different.