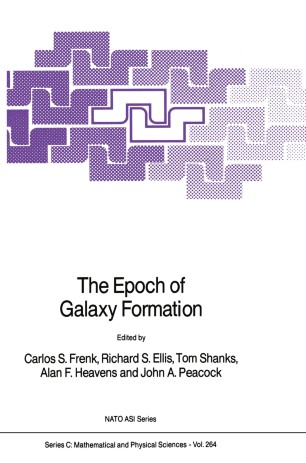 The Epoch of Galaxy Formation

Scientists in the late twentieth century are not the first to view galaxy formation as a phenomenon worthy of explanation in terms of the known laws of physics. Already in 1754 Kant regarded the problem as essentially solved. In his Univerlal Natural Hutory and Theory 0/ the H eaven$ he wrote; "If in the immesurable space in which all the suns of the Milky Way have formed themselves, we assume a point around which, through some cause or other, the first formation of nature out of chaoo began, there the largest mass and a body of extraordinary attraction will have arisen which has thereby become capable of compelling all the systems in the process of being formed within an enormous sphere around it, to fall towards itself as their centre, and to build up a system around it on the great scale . . . . Observation puts this conjecture almost beyond doubt. " More than 200 years later, a similar note of confidence was voiced by Zel'dovicb at an IAU symposium held in Tallin in 1911; "Extrapolating . . . to the next symposium somewhere in the early eighties one can be pretty sure that the question of the formation of galaxies and clusters will be solved in the next few years. " Perhaps few astronomers today would share Kant's near certainty or feel that Zel'dovich's prophecy has been fulfilled, Many, however, will sympathize with the optimistic olltlook of these two statements.