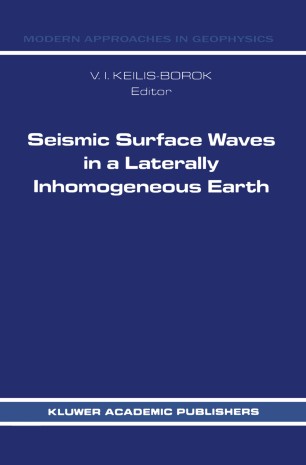 Surface waves form the longest and strongest portion of a seismic record excited by explosions and shallow earthquakes. Traversing areas with diverse geologic structures, they 'absorb' information on the properties of these areas which is best retlected in dispersion, the dependence of velocity on frequency. The other prop­ erties of these waves - polarization, frequency content, attenuation, azimuthal variation of the amplitude and phase - arc also controlled by the medium between the source and the recording station; some of these are affected by the properties of the source itself and by the conditions around it. In recent years surface wave seismology has become an indispensable part of seismological practice. The maximum amplitude in the surface wave train of virtually every earthquake or major explosion is being measured and used by all national and international seismological surveys in the determination of the most important energy parameter of a seismic source, namely, the magnitude M,. The relationship between M, and the body wave magnitude fI1t, is routinely employed in identification of underground nuclear explosions. Surface waves of hundreds of earthquakes recorded every year are being analysed to estimate the seismic moment tensor of earthquake sources, to determine the periods of free oscillations of the Earth, to construct regional dispersion curves from which in turn the crustal and upper mantle structure in various areas is derived, and to evaluate the dissipative parameters of the mantle material.