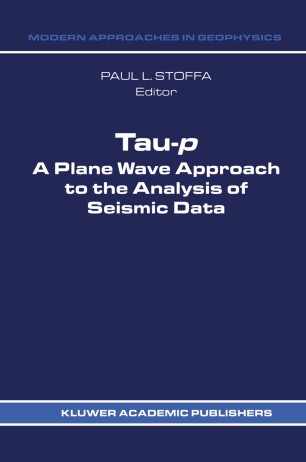 Tau-p: a plane wave approach to the analysis of seismic data

In exploration seismology, data are acquired at multiple source and receiver posi­ tions along a profile line. These data are subsequently processed and interpreted. The primary result of this process is a subsurface image of the exploration target. As part of this procedure, additional information is also obtained about the subsurface material properties, e.g., seismic velocities. The methods that are employed in the acquisition and processing of exploration seismic data are internally consistent. That is, principally near vertical incidence seismic waves are generated, recorded and subsequently imaged. The data processing methods commonly used are based upon a small angle of incidence approximation, thus making the imaging problem tractable for existing data processing technology. Although tremendously successful, the limitations of this method are generally recognized. Current and future exploration goals will likely require the use of additional seismic waves, i.e., both compressional and shear precritical and postcritical reflections and refractions. Also, in addition to making better use of seismic travel times, recent efforts to directly incorporate seismic amplitude variations show that the approach may lead to a better understanding of subsurface rock properties. In response to more demanding exploration goals, recent data acquisition techniques have improved significantly by increasing the spatial aperture and incorporating a large number of closely spaced receivers. The need for better subsurface resolution in depth and position has encouraged the use of 240, 512, and even 1024 recorded data channels with receiver separations of 5 to 25 m.