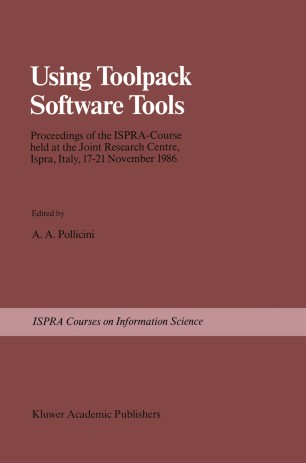 Proceedings of the Ispra-Course held at the Joint Research Centre, Ispra, Italy, 17–21 November 1986

I am very pleased to write these few brief paragraphs introducing this book, and would like to take this opportunity to attempt to set the Toolpack project in an appropriate historical context. The Toolpack project must be considered to have actually began in the Fall of 1978, when Prof. Webb C. Miller, at a meeting at Jet Propulsion Laboratories in Pasadena, California, suggested that there be a large-scale project, called Toolpack, aimed at pulling together a comprehensive collection of mathematical software development tools. It was suggested that the project follow the pattern of other "Pack" projects, such as Eispack, Linpack, and Funpack which had assembled and systematized comprehensive collections of mathematical software in such areas as eigenvalue computation, linear equation solution and special function approximation. From the that the Toolpack project would differ significantly from beginning it was recognized these earlier "Pack" projects in that it was attempting to assemble and systematize software in an area which was not well established and understood. Thus it was not clear how to organize and integrate the tools we were to collect into Toolpack. As a consequence Toolpack became simultaneously a research project and a development project. The research was aimed at determining effective strategies for large-scale integration of large-scale software tools, and the development project was aimed at implementing these strategies and using them to put high quality tools at the disposal of working mathematical software writers.