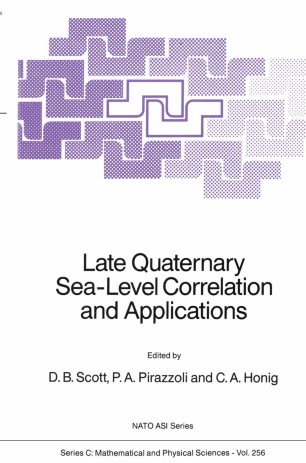 A NATO Advanced Study Institute, "Late Quaternary Sea-level Correlation and Applications", was held together with the Final Meeting of IGCP Project 200 in Halifax, Canada, 19-30 July 1987. This Volume is a collection of the NATO Keynote Papers presented at this meeting. The authors of these papers are from seven of the NATO countries - two each from France, the U. K. , Canada, and the U. S . A. , and one each from Spain, Germany and the Netherlands. With these authors, we are able to assemble work from virtually all of the world's oceans with several different approaches. The Volume is dedicated to Walter S. Newman, one of the best known and best liked sea-level workers of our time who died shortly before this Conference. This Volume contains one of his last contributions and all contributors to this Volume are honoured to be in the company of Walter's last work. There are several papers from North Atlantic countries dealing with Holocene sea level in a variety of ways. Shennan summarizes data from the U. K. and makes a preliminary effort to place the data in the context of a model. Zazo & Goy present new data from the coast of Spain and place it in a stratigraphical context. Van de P1assche re­ assesses previous data and adds new data to the very sea-level sensitive Dutch coast. Leatherman uses sea-level information in the Chesapeake Region to assess coastal management problems.