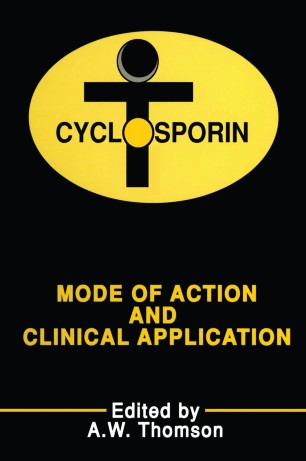 Mode of Action and Clinical Applications

Cyclosporin has had a remarkable effect on clinical organ transplantation. Prior to its introduction, considerable advances had been made in the grafting of vital organs, particularly the kidney, heart and liver. In many developed countries, however, transplantation was not considered wo-rthwhile in terms of gain for the investment of resources. The improved results of kidney grafts following the use of cyclosporin has changed this attitude. For all types of organ transplantation, cyclosporin has resulted in an improvement of functional graft survival and has allowed a reduction in steroid dose and, in some cases, no steroids at all. It has permitted the first successful experimental transplantation of the heart and lungs in primate species by Reitz and colleagues and their results were applied directly to the clinic. It was largely due to the introduction of cyclosporin that the Washington Consensus Meeting on Liver Transplantation came to a favourable recommendation and the result has been the proliferation of units performing liver transplantation, approximately fifty in North America and another fifty in Europe, where previously there had been a handful. Having been involved in cyclosporin for organ grafting from the beginning, I have been able to witness these developments which have far exceeded my expectations once the nephrotoxicity of cyclosporin was demonstrated in man. It is fitting that Dr.