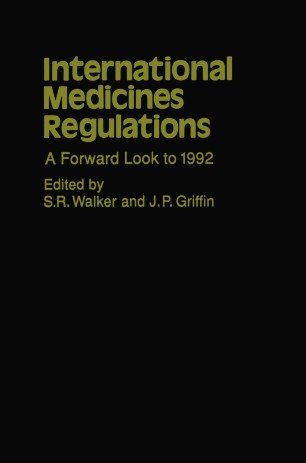 As 1992 looms on the horizon and preparation is made for the completion of the internal market in Europe, the CMR realised the value of addressing some of the issues involved and defining the objectives and achievements of medicines regulations in a number of EEC countries in comparison with Japan and the USA. The overall aim was to use the lessons of past experience to determine the most appropriate way forward. The final debate focused on two possibilities for assessing and granting marketing authorisations for Europe, namely mutual recognition or a centrally organised European Med­ icines Office. These two views were discussed in detail at both the workshop at the Ciba Foundation and the international symposium at the Royal College of Physicians. It is hoped that this sharing of ideas and the publication of the proceedings of this fifth CMR Workshop will have encouraged all concerned to continue the debate so that the final outcome will be the establishment of an efficient system in the community for the benefit of patients, the practising physician and the pharmaceutical industry. We would like to take this opportunity of thanking Brenda Mullinger for the considerable amount of scientific and editorial work that she carried out on the manuscripts, Sheila Wright for providing the secretarial support which allowed the proceedings to be submitted to Kluwer Academic Publishers on disk and Sandra Cox who organised the administrative aspects so vital to the successful running of a Workshop and major international symposium. S. R.