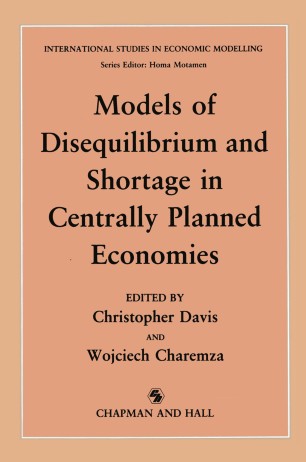 Models of Disequilibrium and Shortage in Centrally Planned Economies

The centrally planned economies (CPEs) of the Soviet Union and Eastern Europe have experienced severe imbalances in domestic and external markets over the past several decades. As a result, they have been chronically afflicted by problems such as excess demand, repressed inflation, deficits of commodities, queues, waiting lists, and forced savings. Economists have responded to these phenomena by developing appropriate theoretical and empirical models of CPEs. Of particular note have been the pioneering studies of Richard Portes on disequilibrium econometric models and Janos Kornai on the shortage economy. Each approach has attracted followers who have produced numerous, innovative macro- and microeconomic models of Poland, Czechoslovakia, the German Democratic Republic, Hungary, and the USSR. These models have proved to be of considerable value in the analysis of the causes, consequences and remedies of disequilibrium phenomena. Inevitably, the new research has also generated controversies both between and within the schools of shortage and disequilibrium modelling, concerning the fundamental nature of the socialist economy, theoretical concepts and definitions, the specification of models, estimation techniques, interpretation of empirical findings, and policy recommend­ ations. Furthermore, the research effort has been energetic but incomplete, so many gaps exist in the field.