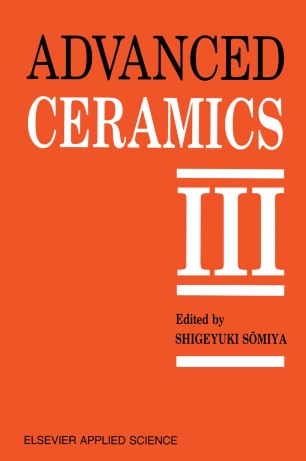 This volume is one in a series which attempts to bring together comprehensive articles on recent advances in ceramics. The volume is dedicated to Professor Shigeyuki Somiya on the occasion of his retirement from the Tokyo Institute of Technology; and it is a most fitting tribute. Professor Somiya has been one of the earliest and most persistent and versatile champions of research in ceramic materials in Japan. He has served this cause extraordinarily well by mixing two strategies. First, by making bridges to the entire international community of ceramic researchers in the US and Europe. Thereby, he kept a window for all of Japanese ceramic science on world class research in the field. It was largely through his efforts that the series of US-Japan International Cooperation Sessions in Ceram­ ics were started. I was honored to be US chairman of the first such in 1969. At Penn State we are delighted to claim Professor Somiya as an honorary alumnus. The high regard in which he is held is shown by the many of his colleagues from the University who have chosen to come over for this conference. He was also recognized with a Penn State MRL Bridge-Building award in 1988 to reflect his pioneering in establishing the two-way exchange with Japan.