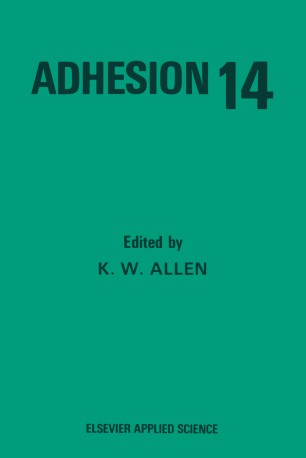 As interest in the whole science and technology of adhesion and adhesives grows, so do the meetings concerned with it proliferate. In the light of this, it is gratifying that this, the oldest regular meeting in the field, maintains its position by attracting both speakers and audience of such high standard from across the world year after year; further, that we are enabled to reach a wider audience through the publication of the papers presented at the conference in this series of volumes. This present volume, Number 14, differs from its predecessors by the addition of two extra items. Firstly, 1989 marked the twenty-fifth anniversary of the Adhesion Society of Japan. As part of the celebrations, the Society arranged a mission to Europe which culminated in a Special Anglo-Japanese Symposium on 21 April at The City University, London. We are fortunate in being able to include two of the papers presented by our Japanese visitors. Secondly, on Christmas Day,just as the final work on this volume was being completed, William C. ('Bill') Wake sadly died. We have included an appreciation of his contribution both to these conferences and to the world of adhesion generally. Finally, may I once again express my thanks to all those who have made possible the production of this volume. They are far too numerous to mention individually, including the authors, their secretaries, various members of the staff of the University, and our publishers; to them all, 'Thank you very much'.