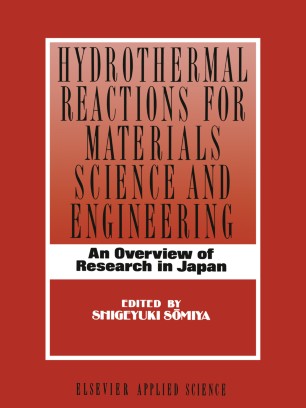 An Overview of Research in Japan

According to the late Professor Emeritus Seitaro Tsuboi,l the word 'hydrothermal' was used as early as 1849 by a British geologist, Sir Roderick Murchison (1792-187 I), in relation to the action of heated water in bringing about change in the earth's crust. The term abounds in later geological literature, and is most frequently met in connection with the processes that take place at a stage near the closing in the course of consolidation of magma. When a cooling magma reaches that stage, the residual liquid contains a large proportion of volatile components, chiefly water, and further cooling results in the formation of minerals of special interest or ore-deposits. A great concern of Tsuboi's as a petrologist was to elucidate the details of the nature of various actions involved in these 'hydrothermal processes', of which little was known. It is remarkable that, in the last few decades, extensive high-temperature and high-pressure experiments, in which water plays an important role, have become practicable in laboratories, owing to the development of new apparatus and new methods. As a result, the knowledge essential to the elucidation of 'hydrothermal processes' has been improved, but is still far from complete.