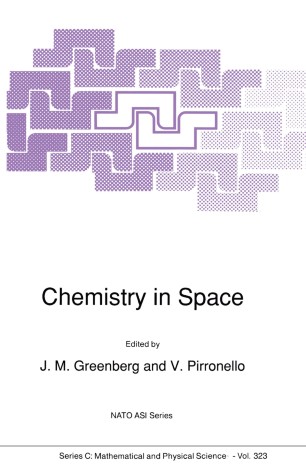 This volume contains the lectures presented at the first course of the Inter­ national School of Space Chemistry held in Erice (Sicily) from May 10 to May 20 at the 'E. Majorana Centre for Scientific Culture'. The course was attended by 57 participants from 11 countries. The recognition by Professor A. Zichichi that space chemistry is one of the important and rapidly growing scientific disciplines with many and varied appli­ cations provided the stimulation to initiate this new school. Historically, the study of chemistry in space had its major origins in comets, the solar nebula and circumstellar envelopes before the interstellar medium achieved its current prominence. A remarkably rapid development in interstellar chemistry was precipitated by the discovery of formaldehyde in the late 1960's made possible by the new radio observational techniques. A four atom molecule in interstellar space was indeed a surprise considering that only a short time ear­ lier there were still arguments about the existence of the simplest of all molecules - the hydrogen molecule. The application of ion-molecule reactions to interstellar cloud chemistry provided a rich variety of new possibilities which were, however, continuously under pressure to keep pace with radio-astronomical discoveries of more and more complex molecules.