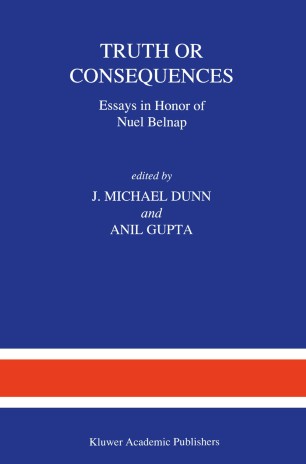 Essays in Honor of Nuel Belnap

The essays in this collection are written by students, colleagues, and friends of Nuel Belnap to honor him on his sixtieth birthday. Our original plan was to include pieces from fonner students only, but we have deviated from this ever so slightly for a variety of personal and practical reasons. Belnap's research accomplishments are numerous and well known: He has founded (together with Alan Ross Anderson) a whole branch of logic known as "relevance logic." He has made contributions of fundamental importance to the logic of questions. His work in modal logic, fonnal pragmatics, and the theory of truth has been highly influential. And the list goes on. Belnap's accomplishments as a teacher are also distinguished and well known but, by virtue of the essential privacy of the teaching relationship, not so well understood. We would like to reflect a little on what makes him such an outstanding teacher.