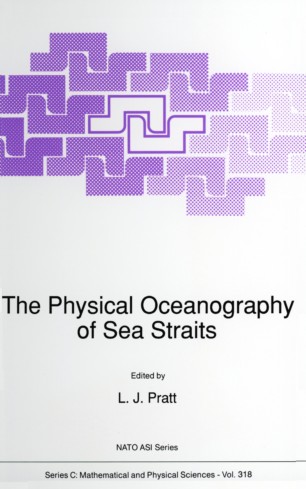 The Physical Oceanography of Sea Straits

Suppose one were given the task of mapping the general circulation in an unfamiliar ocean. The ocean, like our own, is subdivided into basins and marginal seas interconnected by sea straits. Assuming a limited budget for this undertaking, one would do well to choose the straits as observational starting points. To begin with, the currents flowing from one basin to the next, over possibly wide and time-varying paths, are confined to narrow and stable routes within the straits. Mass, heat and chemical budgets for individual basins can be formulated in terms of the fluxes measured across the straits using a relatively small number of instruments. The confinement of the flow by a strait can also give rise to profound dynamical conse­ quences including choking or hydraulic control, a process similar to that by which a dam regulates the flow from a reservoir. The funneling geometry can lead to enhanced tidal modulation and increased velocities, giving rise to local instabilities, mixing, internal bores, jumps, and other striking hydraulic and fine scale phenomena. In short, sea straits repre­ sent choke points which are observationally and dynamically strategic and which contain a full range of fascinating physical processes.