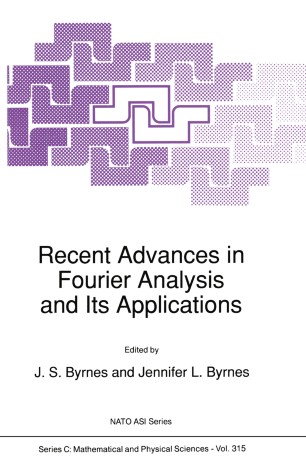 Recent Advances in Fourier Analysis and Its Applications

This volume contains papers presented at the July, 1989 NATO Advanced Study Institute on Fourier Analysis and its Applications. The conference, held at the beautiful II Ciocco resort near Lucca, in the glorious Tuscany region of northern Italy, created a dynamic in­ teraction between world-renowned scientists working in the usually disparate communities of pure and applied Fourier analysts. The papers to be found herein include important new results in x-ray crystallography by Nobel Laureate Herbert Hauptman, the application of the new concept of bispectrum to system identification by renowned probabilist Athanasios Papoulis, fascinating appli­ cations of number theory in Fourier analysis by eminent electrical engineer Manfred R. Schroeder, and exciting concepts regarding polynomials with restricted coefficients by foremost mathematical problem solver Donald J. Newman. The remaining papers further illustrate the inherent power and beauty of classical Fourier analysis, whether the results presented were sought as an end in themselves, or whether these classical methods were employed as a tool in illustrating and solving a particular applied problem. From antenna design to concert hall acoustics to image and speech processing to unimodular polynomi­ als, each conference participant benefited significantly from his or her exposure, in many cases for the first time, to those scientists on the other end of the spectrum from them­ selves. The purpose of this volume is to pass those benefits on to the reader.