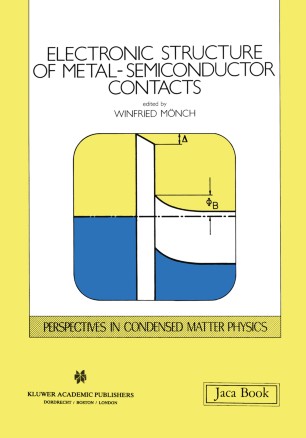 Interface and surface science have been important in the development of semicon­ ductor physics right from the beginning on. Modern device concepts are not only based on p-n junctions, which are interfaces between regions containing different types of dopants, but take advantage of the electronic properties of semiconductor­ insulator interfaces, heterojunctions between distinct semiconductors, and metal­ semiconductor contacts. The latter ones stood almost at the very beginning of semi­ conductor physics at the end of the last century. The rectifying properties of metal-semiconductor contacts were first described by Braun in 1874. A physically correct explanation of unilateral conduction, as this deviation from Ohm's law was called, could not be given at that time. A prerequisite was Wilson's quantum theory of electronic semi-conductors which he published in 1931. A few years later, in 1938, Schottky finally explained the rectification at metal-semiconductor contacts by a space-