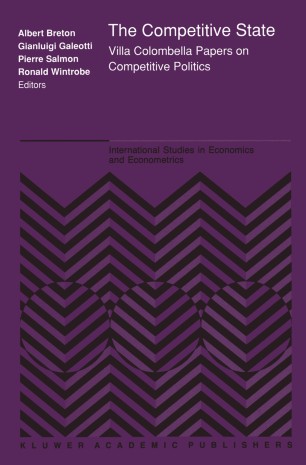 Part of the International Studies in Economics and Econometrics book series (ISEE, volume 21)

I. The concept of competition played a central role in the very first attempts to apply the tools of economics to the analysis of politics. Adopting Hotelling's (1929) industrial organization model of imperfect competition in markets in which space has a predominant role, Downs (1957), following on some perceptive insights of Schumpeter (1942), was able to formulate a model of electoral competition in which political parties, seeking the support of citizens, compete against each other in offering policies designed to elicit their vote. Downs' model and the numerous variants to which it gave birth soon became the major component of what was to become Public Choice Theory. The enormous efforts of the last 30 years devoted to modelling electoral competition have helped improve our understanding of politics and have contributed a basic element that undoubtedly will remain essential to any reasonably complete theory of politics. But whatever may have been early expectations, it is now clear that electoral competition will only be one such element. More recently, the idea of competition has been used to model interest-group behavior. Becker (1983), building on earlier work by Bentley (1908), Truman (1958), Olson (1965), Stigler (1971) and Peltzman (1976), applied the Public Finance analysis of the excess-burden of taxes and subsidies - to which, incidentally, Hotelling (1938) had made pioneering contribution- to produce a model in which competition between interest groups determines an equilibrium distribution of income.