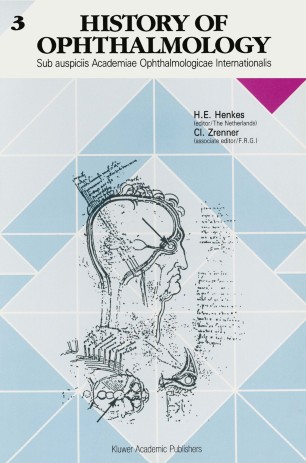 Part of the History of Ophthalmology book series (ACOI, volume 3)

When the eyeball is indented in total darkness, within less than 200 mil­ liseconds an oval or quarter-moon shaped spot of light is perceived in the part of the visual field corresponding to the indented region of the retina. In the seconds following, this phosphene extends across the whole visual field and alters in structure during further eyeball indentation. It is then seen as irregular large bright spots of light, finely structured moving light grains ('light nebula') and stationary bright stars. Regular geometrical patterns appear only when both eyes are indented simultaneously [1]. When the eyeball deformation is released, part of the retina again lights up for another one or two seconds and curved light lines are seen following the course of the larger retinal vessels (Fig. 1). In the following we will review the history of this phenomenon, which played an important role during the first 2200 years of vision theories and in the development of models to explain normal vision. 2. Pre-Socratic philosophers, Plato and Aristotle Alcmaeon of Croton (6-5th century B. C. ), who was a member of the Pythagoraean sect and one of the founders of Greek medicine, was the first to describe mechanical deformation of the eyeball leading to light sensa­ tions. According to Aristotle's pupil Theophrast of Eresos, Alcmaeon report­ ed that 'the eye obviously has fire within,for when the eye is struckfireflashes out' [2, p. 88].