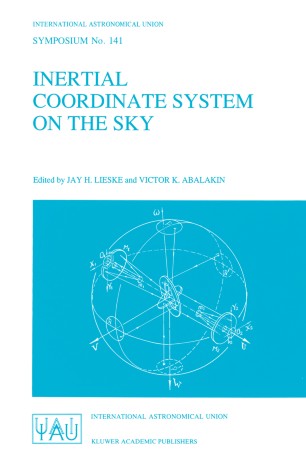 Inertial Coordinate System on the Sky

Proceedings of the 141st Symposium of the International Astronomical Union Held in Leningrad, U.S.S.R., October 17–21, 1989

IA U Symposium Number 141 "Inertial Coordinate System on the Sky" was held in Leningrad, USSR from 17-21 October 1989. The symposium also commemorated the 150th anniversary of the founding of Pulkovo Observatory. The scientific program was presented in ten half-day sessions. Most sessions were held at the Pulkovskaya Hotel, but one session which highlighted Pulkovo's current programs was held at Pulkovo Observatory. The sessions were organized into general categories pertaining to the legacy of Pulkovo for inertial systems; current programs at Pulkovo Observatory; concepts, definitions and models; and the realization and comparision of reference frames. More than 140 scientific papers were presented, either orally or in poster form. Extensive use was made of electronic mail and computer-readable communications, and more than two-thirds of the authors made use of the opportunity to submit papers for formatting by the editors. The meeting was truly a symposium in the Greek sense of the word-a free-flowing exchange of ideas and opinions. The final two papers presented at the symposium by Wilkins and by Westerhout are presented at an eady stage in the published proceedings, in order to help focus the reader's attention on the concepts and problems explored in subsequent papers. As pointed out by G.