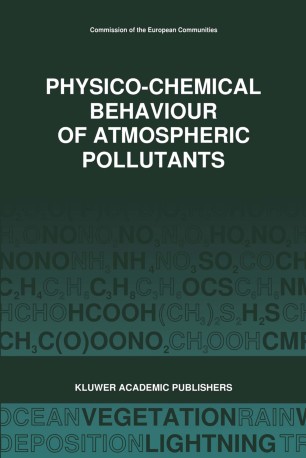 In October 1979 the First European Symposium on Physico-Chemical Behaviour of Atmospheric Pollutants was held In Ispra (Italy); 83 scientists attended the conference contributing 44 papers. Ten years later, the Fifth European Symposium on Physico-Chemical Behaviour of Atmospheric Pollutants, organized as for the previous Symposia In the framework of the Concerted Action *COST 611, was held in Varese (Italy) from 25 to 28 September 1989. This Volume contains the oral papers and the posters presented at this Symposium. Participation at this Conference Is more than doubled of that In 1979 In terms of scientists (185) and contributed papers (110). This simple comparison demonstrates once more the growing attention of the scientific community to the problems related to the pollution of the atmosphere. During these years, Important new Issues have arisen (global pol lutlon/cl Imatlc changes) whl Ie old ones have been reviewed due to new experimental evidence (depletion of stratospheric ozone). The Symposium offered the best opportunity for a review of the current studies and technical progress achieved In the various sectors of the Concerted Action since the Fourth Symposium held In Stresa (Italy) In September 1986. In 1987 the scientific programme and the operational structures of the COST 611 Project were revised. The Project Is now structured into three Working Parties: 1. Development of Analytical Methods to measure Trace Components of the Atmosphere. 2. Atmospheric Chemical and Photochemical Processes. 3. Field measurements and their Interpretation.