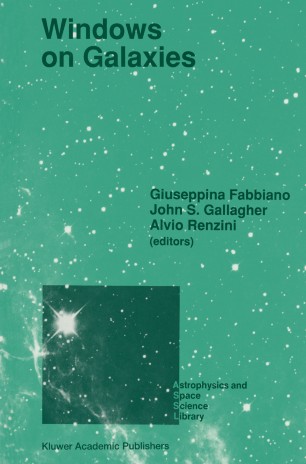 Proceedings of the Sixth Workshop of the Advanced School of Astronomy of the Ettore Majorana Centre for Scientific Culture, Erice, Italy, May 21–31, 1989

Along with the traditional optical window, many new windows have been opened on galaxies in the last two decades, made possible by new developments in groundbased detectors and by space missions that allow detection of photons that are otherwise absorbed by the Earth's atmosphere. Galaxies can now be observed in the radio, submillimeter, IR, optical, UV, X- and gamma-ray bands, each window allowing us to learn more about galactic components and properties. These developments have also imposed the view that a deeper understanding of even normal galaxies requires a panchromatic approach, making use of all of the data gathered from the different windows to synthesize a comprehensive physical image of these complex astronomical systems. Windows on Galaxies presents a comprehensive view of galaxies through all the available windows, bringing together both theoretical and experimental approaches in the form of a series of reviews reporting the most recent developments complemented by contributed talks and discussions.
TEXT NO. 2
The sixth workshop of the Advanced School of Astronomy examined galaxies through all available wavelength windows. Over the last twenty years, new wavelength windows have been opened in astronomy which have created many new possibilities for the observation of the properties of galaxies. The outcome of the meeting clearly stated that the approach towards the studying of galaxies should be panchromatic.
Each window, from radio to gamma-rays, shows different components, and a synthesis of this knowledge presents astronomers with a comprehensive physical image of these astronomical systems: star formation, evolution of galaxies, molecular contents, gas flows, interstellar matter and properties of galaxies in the several wavelength fields are discussed in this volume.