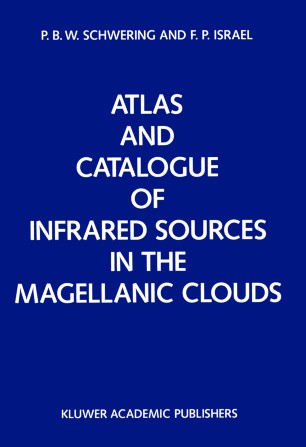 Atlas and Catalogue of Infrared Sources in the Magellanic Clouds

Around the beginning of the sixteenth century, Portuguese and Dutch sailors first ventured into southern seas. With their keen navigational interest in the skies, they noted the continuous presence of two cloud-like features, not far from the almost immediately Southern Pole. The first literature mention of these 'clouds' was in the journal written in 1520 by the Italian navigator Pigafetta on the first circumnavigation of the globe by Magalhaes (c/. Pigafetta et ai. , 1962). In honour of this exploit, the objects have since become known as the Magellanic Clouds, although the Dutch name 'Kaapsche Wolken' (Cape Clouds - after the Cape of Good Hope) has also been in use for centuries. The Large and Small Magellanic Clouds are dwarf irregular galaxies, orbiting our own Milky Way Galaxy, presently at distances of 53 and 63 kpc respectively (Humphreys, 1984) . . They are the galaxies nearest to us: most other Local Group galaxies are of order ten times more distant. The LMC and SMC are also the prototypical blue dwarf irregulars, representatives of a class of objects in which several hundred more distant objects are now known. Their masses are a few per cent of the mass of the Milky Way Galaxy, but they are relatively gas-rich and appear to be, at the present epoch, forming stars at a more prodiguous rate than our Galaxy (c/. Lequeux, 1984).