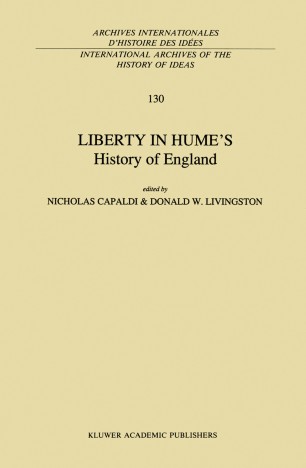 Liberty in Hume’s History of England

LIBERTY IN HUME'S HISTORY OF ENGLAND In his own lifetime, Hume was feted by his admirers as a great historian, and even his enemies conceded that he was a controversial historian with whom one had to reckon. On the other hand, Hume failed to achieve positive recognition for his philosophical views. It was Hume's History of England that played an influential role in public policy debate during the eighteenth century in both Great Britain and in the United States. Hume's Hist01Y of England passed through seven editions and was beginning to be perceived as a classic before Hume's death. Voltaire, as an historian, considered it "perhaps the best ever written in any lan­ guage. " Gibbon greatly admired Hume's work and said, of a letter written by Hume in 1776 praising the Decline and Fall of the Roman Empire, that a compliment from Hume "overpaid the labor of ten years. " After Hume's death on August 20, 1776, the History became a factor in the revolutionary events that began to unfold. Louis XVI was a close student of Hume's History, and his valet records that, upon having learned that the Convention had voted the death penalty, the King asked for the volume in Hume's History covering the trial and execution of Charles I to read in the days that remained. But if Louis XVI found the consolations of philosophical history in the Stuart volumes, Thomas Jefferson saw in them a cause for alarm.