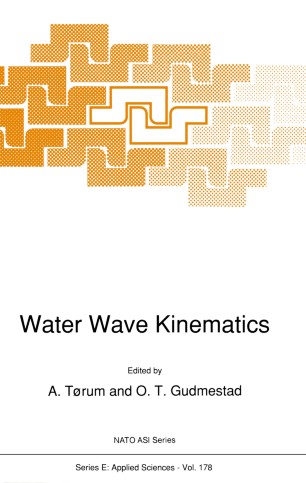 Water wave kinematics is a central field of study in ocean and coastal engineering. The wave forces on structures as well as sand erosion both on coastlines and in the ocean are to a large extent governed by the local distribution of velocities and accelerations of the water particles. Our knowledge of waves has generally been derived from measurements of the water surface elevations. The reason for this is that the surface elevations have been of primary interest and fairly cheap and reliable instruments have been developed for such measurements. The water wave kinematics has then been derived from the surface elevation information by various theories. However. the different theories for the calculation of water particle velocities and acceleration have turned out to give significant differences in the calculated responses of structures. In recent years new measurement techniques have made it possible to make accurate velocity measurements. Hence. the editors deemed it to be useful to bring together a group of experts working actively as researchers in the field of water wave kinematics. These experts included theoreticians as well as experimentalists on wave kinematics. It was also deemed useful to include experts on the response of structures to have their views from a structural engineering point of view on what information is really needed on water wave kinematics.