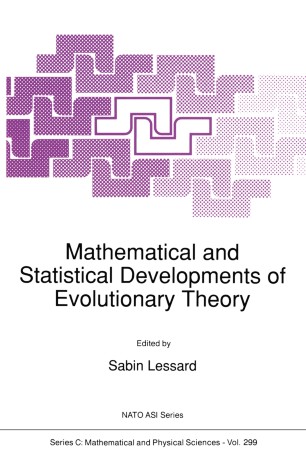 Mathematical and statistical approaches to evolutionary theory are numerous. The NATO Advanced Study Institute (ASI) held at the Universite de Montreal, Montreal, August 3-21, 1987, was an opportunity to review most of the classical approaches and to study the more recent developments. The participation of theoretical biologists and geneticists as well as applied mathematicians and statisticians made possible exchanges of ideas between students and scholars having different views on the subject. These Proceedings contain the lecture notes of seven (7) of the eleven (11) series of lectures that were given. ESS (Evolutionarily Stable Stragety) theory is considered from many perspectives, from a game-theoretic approach to understanding behavior and evolution (W.G.S. Hines), and a systematic classification of properties and patterns of ESS's (C. Cannings) to particular applications of the differential geometry of the Shahshahani metric (E. Akin). Extensions of ESS theory to sexual populations and finite populations, not to mention games between relatives, are presented (W.G.S. Hines). Special attention is given to the classical game called the War of Attrition but with n players and random rewards (C. Cannings). The Shahshahani metric is also used to show the occurrence of cycling in the two-locus, two-allele model (E. Akin). Various inference problems in population genetics are adressed. Procedures to detect and measure selection components and polymorphism (in particular, the Wahlund effect) at one or several loci from mother-offspring combinations in natural populations are discussed at length (F.B. Christiansen).