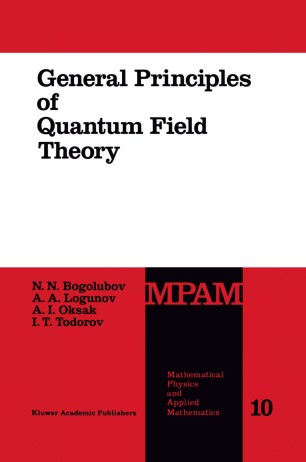 The majority of the "memorable" results of relativistic quantum theory were obtained within the framework of the local quantum field approach. The explanation of the basic principles of the local theory and its mathematical structure has left its mark on all modern activity in this area. Originally, the axiomatic approach arose from attempts to give a mathematical meaning to the quantum field theory of strong interactions (of Yukawa type). The fields in such a theory are realized by operators in Hilbert space with a positive Poincare-invariant scalar product. This "classical" part of the axiomatic approach attained its modern form as far back as the sixties. * It has retained its importance even to this day, in spite of the fact that nowadays the main prospects for the description of the electro-weak and strong interactions are in connection with the theory of gauge fields. In fact, from the point of view of the quark model, the theory of strong interactions of Wightman type was obtained by restricting attention to just the "physical" local operators (such as hadronic fields consisting of ''fundamental'' quark fields) acting in a Hilbert space of physical states. In principle, there are enough such "physical" fields for a description of hadronic physics, although this means that one must reject the traditional local Lagrangian formalism. (The connection is restored in the approximation of low-energy "phe­ nomenological" Lagrangians.