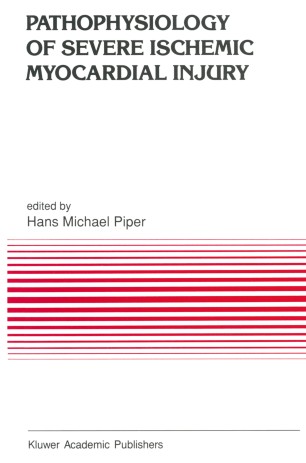 In industrialized countries, ischemic heart disease is by far the most common organ-specific cause of death. The thrombotic occlusion of a coronary artery which had previously been severely altered by atherosclerosis, is the most frequent cause of ischemic deterioration of myocardial tissue, i. e. myocardial infarction. Death of the human individual occurs when myocardial ischemia causes a critical impairment of cardiac pump function. The failure of a heart with an ischemic area may be due to the amount and location of contractile tissue becoming paralyzed or even necrotic, or to arrhythmias provoked by the ischemic condition, or by a combination of both factors. Considerable progress has been made in the development of antiarrythmic therapy. Effective tools have been developed to reperfuse ischemic myocar­ dial tissue as soon as the patient reaches hospital. However, therapeutical principles for the ischemic-reperfused myocardium which would specifically interfere with the state of injury of the ischemic tissue at the onset of reperfusion, and avoid the apparent hazards of the reperfusion process itself, have yet to be established. But not only approved therapeutical concepts are lacking, the pathophysiology of myocardial cell injury in pro­ gressive ischemia and under reperfusion is in itself only partly understood.