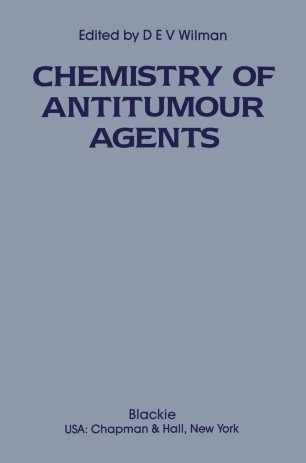 The Chemistry of Antitumour Agents

Walter C. J. ROSS Emeritus Professor, University of London To paraphrase a statement made by Howard E. Skipper many years ago, 'We cancer chemotherapists have often exploited and overworked our chemist colleagues and they have been conveniently forgotten at award giving times'. This book is an attempt to rectify this and highlight the contribution of the chemist in modifying the structure of various types of agent to enhance their effectiveness as inhibitors of the growth of neoplastic tissues. Cancer chemotherapy is a relatively new discipline, coming later than the introduction of sulphonamides and antibiotics. Modern anti-cancer therapy started with the report of the use of a war gas methyl-di-(2-chloroethyl)amine (HN2) in 1946 for the treatment of Hodgkin's disease. The recognition that this compound acted as a bifunctional alkylating agent under physiological conditions led to the synthesis of a wide range of drugs with similar properties. Amongst these were chlorambucil, melphalan, busulphan, and cyclophos­ phamide which still find use today. Somewhat later, a range of antibiotics was found to be effective, for example aminopterin (1948) and 6-mercaptopurine (1958) to treat acute leukaemias and 5-fluorouracil and 6-azauracil (1957-8) which were used against a variety of cancers. Since these early days the net has been cast ever wider and, as well as ingenious modifications of the compounds mentioned above, anticancer drugs now include growing classes of compounds ranging from purely synthetic agents to natural products. Many of these are discussed in the present book.