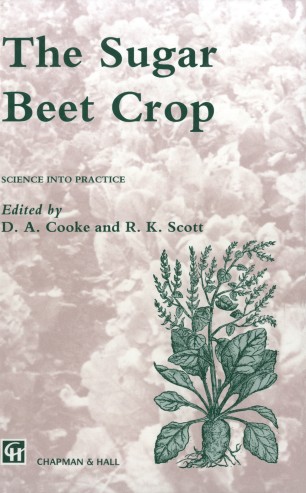 D.A. Cooke and R.K. Scott Sugar beet is one of just two crops (the other being sugar cane) which constitute the only important sources of sucrose - a product with sweeten­ ing and preserving properties that make it a major component of, or additive to, a vast range of foods, beverages and pharmaceuticals. Sugar, as sucrose is almost invariably called, has been a valued compo­ nent of the human diet for thousands of years. For the great majority of that time the only source of pure sucrose was the sugar-cane plant, varieties of which are all species or hybrids within the genus Saccharum. The sugar-cane crop was, and is, restricted to tropical and subtropical regions, and until the eighteenth century the sugar produced from it was available in Europe only to the privileged few. However, the expansion of cane production, particularly in the Caribbean area, in the late seventeenth and the eighteenth centuries, and the new sugar-beet crop in Europe in the nineteenth century, meant that sugar became available to an increasing proportion of the world's population.