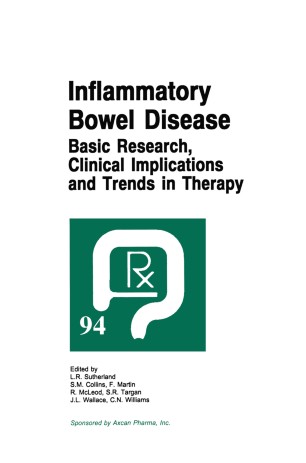 The inflammatory bowel diseases, of unknown etiology and for which there are no cures, continue to attract the attention and interest of gastroenterologists, internists and surgeons. International symposia are common and it is safe to say that there is at least one major symposium held somewhere in the world each year. This book encompasses the proceedings of two recent symposia held in Victoria, British Columbia, Canada. The symposia were the fifth and sixth international meetings focused on inflammatory bowel disease in Canada in the last eight years. Once again they were sponsored by Axcan Pharma, Inc. (formerly Interfalk Canada, Inc.) and endorsed by the Canadian Association of Gastroenterology. As has become traditional at such meetings the faculty was drawn from an international roster ofleaders in the field of inflammatory bowel disease and gastroenterology. The chapters of the proceedings provide a timely, up-to-date review of the major issues, including those within the realm of basic science and others dealing with clinical problems. The first symposium, 'Basic Research and Clinical Implications', was co-ordinated by John Wallace in association with Stephen Collins and Stephan Targan. The themes of this section were organized under the general topics of predisposing factors (genetics, animal models, infection, permeability, and immune deficits) and the pathophysiology of intestinal inflammation. The second symposium, Trends in Therapy' was organized by Lloyd Sutherland along with Franc;:ois Martin, Robin McLeod and Noel Williams.