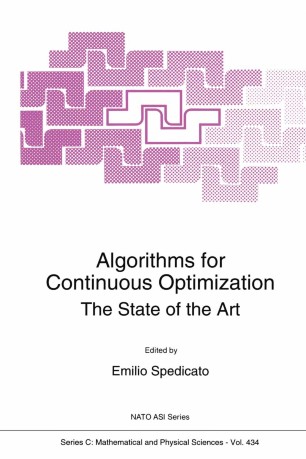 The State of the Art

The NATO Advanced Study Institute on "Algorithms for continuous optimiza­ tion: the state of the art" was held September 5-18, 1993, at II Ciocco, Barga, Italy. It was attended by 75 students (among them many well known specialists in optimiza­ tion) from the following countries: Belgium, Brasil, Canada, China, Czech Republic, France, Germany, Greece, Hungary, Italy, Poland, Portugal, Rumania, Spain, Turkey, UK, USA, Venezuela. The lectures were given by 17 well known specialists in the field, from Brasil, China, Germany, Italy, Portugal, Russia, Sweden, UK, USA. Solving continuous optimization problems is a fundamental task in computational mathematics for applications in areas of engineering, economics, chemistry, biology and so on. Most real problems are nonlinear and can be of quite large size. Devel­ oping efficient algorithms for continuous optimization has been an important field of research in the last 30 years, with much additional impetus provided in the last decade by the availability of very fast and parallel computers. Techniques, like the simplex method, that were already considered fully developed thirty years ago have been thoroughly revised and enormously improved. The aim of this ASI was to present the state of the art in this field. While not all important aspects could be covered in the fifty hours of lectures (for instance multiob­ jective optimization had to be skipped), we believe that most important topics were presented, many of them by scientists who greatly contributed to their development.