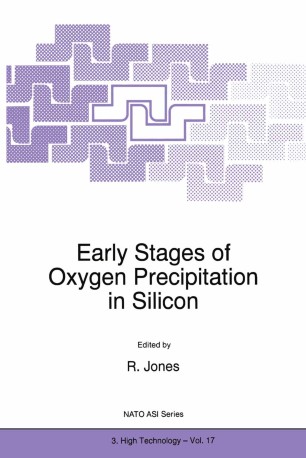 It was fOlllld as long ago as 1954 that heating oxygen rich silicon to around 450°C produced electrical active defects - the so called thermal donors. The inference was that the donors were created by some defect produced by the aggregation of oxygen. Since then, there has been an enor­ mous amount of work carried out to elucidate the detailed mechanism by which they, and other defects, are generated. This task has been made all the more relevant as silicon is one of the most important technological ma­ terials in everyday use and oxygen is its most common impurity. However, even after forty years, the details of the processes by which the donors and other defects are generated are still obscure. The difficulty of the problem is made more apparent when it is realised that there is only one oxygen atom in about ten thousand silicon atoms and so it is difficult to devise experiments to 'see' what happens during the early stages of oxygen precipitation when complexes of two, three or four 0xygen atoms are formed. However, new important new findings have emerged from experiments such as the careful monitoring of the changes in the infra­ red lattice absorption spectra over long durations, the observation of the growth of new bands which are correlated with electronic infra-red data, and high resolution ENDOR studies. In addition, progress has been made in the improved control of samples containing oxygen, carbon, nitrogen and hydrogen.