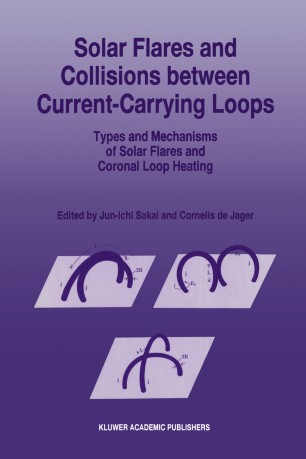 Types and Mechanisms of Solar Flares and Coronal Loop Heating

In this volume we compare modem observations of solar flares with results from recent theoretical research and simulation studies on current-carrying loops and their interaction. These topics have undergone rapid developments in the course of recent years. Observational results by X-ray monitoring and imaging spacecraft in the seventies and by dedicated imaging instrumentation in the satellites Solar Max­ imum Mission and Hinotori, launched 1980 and 1981, have shown the importance of X-ray imaging for understanding the ignition processes of solar flares. Such observations, in tum, stimulated theoretical studies, centered around the flux-tube concept. The classical idea that flares originate by interaction of current-carrying loops was developed and proved to be promising. Concepts on reconnection and coalescence of flux tubes were developed, and their consequences studied. The Yohkoh spacecraft, launched 1991, showed the overwhelming importance of coro­ nal flux tubes and their many possible ways of interaction. Subsequent and parallel theoretical studies and simulations, differentiating between the topology of interact­ ing fluxtubes, demonstrated that the mutual positioning and the way of interaction are important for the subsequent processes of energy release in flares and the many associated phenomena such as the expUlsion of jets and the emission of X -ray and microwave radiation. The new developments now enable researchers to understand and classify flares in a physically significant way. Various processes of accelera­ tion are active in and after flares on greatly varying timescales; these can now be distinguished and explained.